EVENT CANCELLED. Please contact your ticket point of purchase to claim a refund on your tickets.

After a decade building her career as a respected actress, Mandy Moore comes to Orpheum Theatre Boston on Sunday 22nd March 2020 as part of a tour of intimate venues, marking a long-awaited return to music! Moore, who has been starring in the NBC family comedy-drama series This Is Us since 2016, has not released an album since 2009, but looks to have one in the mix and will be performing a set of both fan favorites and brand new tunes at this very special show! 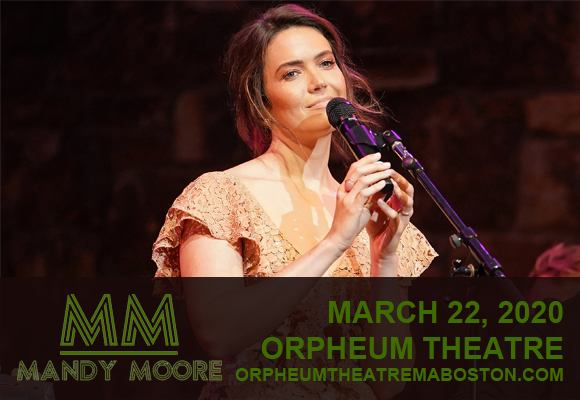 American singer-songwriter and actress Mandy Moore's career began in 1999 at age 15, when her debut single "Candy" propelled her to success alongside other teen pop stars of the era: Christina Aguilera, Jessica Simpson and Britney Spears. Blossoming from manufactured bubblegum pop sensation to folk-influenced singer-songwriter, Moore has released six studio albums over the years: I Wanna Be With You (2000), Mandy Moore (2001), Coverage (2003), Wild Hope (2007), and Amanda Leigh (2009). Over the following decade, Moore focussed on her acting work, and landed roles in a number of high profile films, as well as voicing Rapunzel in the Disney movie Tangled, and its subsequent spin-offs. She has starred as Rebecca Pearson in the NBC family comedy-drama series This Is Us since 2016, for which she has been nominated for the Golden Globe Award for Best Supporting Actress and the Primetime Emmy Award for Outstanding Lead Actress in a Drama Series, and won two Screen Actors Guild Awards for Outstanding Performance by an Ensemble in a Drama Series for her performance in the role.