One of the most exciting names on the pop and R&B scene, Alessia Cara, comes to Orpheum Theatre Boston on Monday 21st October 2019 for a show you will never forget! Cara is touring in support of her second studio album, The Pains of Growing, which she released last year, but no doubt she'll also be peforming some brand new tracks from her brand new EP, This Summer, which launched the singles "Ready" and "Rooting For You"! 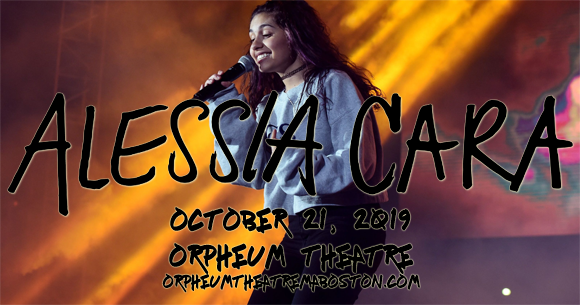 The first Canadian act to ever win the Grammy Award for Best New Artist, Canadian singer, songwriter and instrumentalist began her music career in 2013 posting acoustic covers on YouTube, where she caught the attention of EP Entertainment and Def Jam Recordings, who signed her the following year. After releasing the single "Here" in 2015, which reached number 19 on the Canadian Hot 100 chart and number five on the Billboard Hot 100 chart, she followed later that year with her debut album, Know-It-All. Know-It-All peaked at number 8 on the Canadian Albums Chart and number 9 on the Billboard 200 chart in the United States, launching another top 10 US hit, "Scars to Your Beautiful". At the 2018 Grammy Awards, Cara received four nominations, including Best New Artist, which she went on to win. That same year, she released her second studio album, The Pains of Growing, which launched the singles "Growing Pains", "Trust My Lonely" and "Out of Love".