The Pop Punk Queen, Avril Lavigne, comes to Orpheum Theatre Boston on Thursday 3rd October 2019 on the Head Above Water tour! The tour supports the release of her sixth studio album of the same name, marking a triumphant return to music for Lavigne, who has struggled with health problems over the past few years. However, the Canadian singer is now back and better than ever, and is ready to pull out all the stops for her first tour in five years! She'll be joined in supoort by Jagwar Twin! 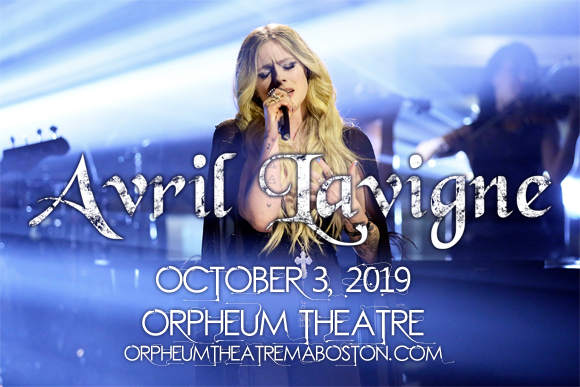 With sales of over 40 million albums and over 50 million singles worldwide to date, Canadian singer, songwriter, and actress Avril Lavigne is the third-best-selling Canadian female artist of all time. Lavigne made her debut in 2002 with her first album, Let Go, which launched her breakthrough single, "Complicated", among others. "Complicated" reached number one in several countries worldwide and made her the youngest female solo artist to have a number-one album in the United Kingdom. She followed in 2004 with Under My Skin, which was her first album to reach the top of the Billboard 200 chart in the United States, going on to sell 10 million copies worldwide. After a six-year hiatus, Lavigne returned to music this year with the release of Head Above Water, her sixth studio album.